With Its Needle Point And Serrated Edges, The Gunther Point Is Both Dangerous & Delicate 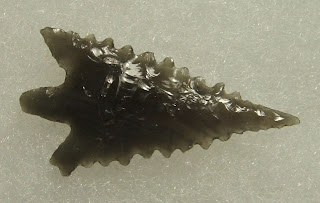 Found across northern California, western and central Oregon, and southern Washington along the Columbia River gorge, there are several recognized varieties of Gunther arrowheads.

These dramatically designed small arrowheads are sometimes said to be barbed to serve as harpoon-like arrows for hunting large fish, yet many have also been found in the forested mountain and foothill areas where they were used effectively in hunting large and small game animals, too.

They were made from colorful types of quartz such as agate, jasper and petrified wood, as well as volcanic materials such as basalt and obsidian.

The serrations along the blade of the Gunther points exhibit a greater degree of discipline and craftsmanship than some other Northwest arrowheads, such as the Calapooya points, many of which seem to be almost wildly serrated.

Either way, the serrations serve as effective cutting devices upon the arrowhead’s impact into a game target, and also serve as a self-sharpening feature for the arrowhead.
Posted by fscott4562 at 2:49 PM 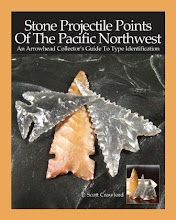